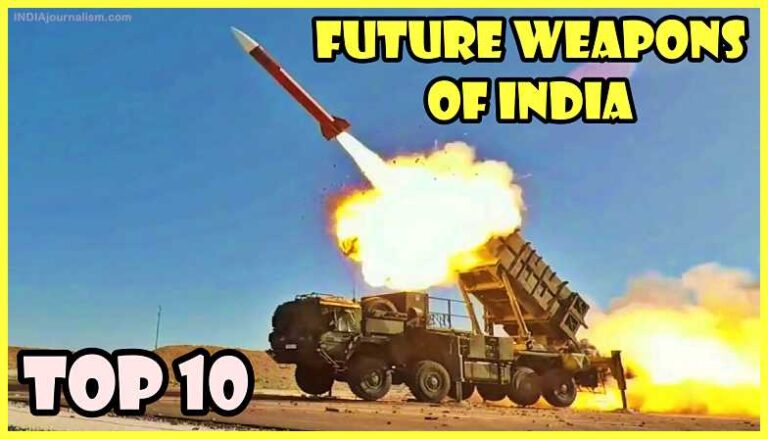 Here is the list of the Top 10 Future Weapons of India, You Probably didn’t know about with a brief explanation. The Indian Air Force has been undergoing a modernization program to replace and upgrade its aging and outdated equipment from the late 90s to advanced standards. For that reason, it has started procuring and developing aircraft, weapons, associated technologies, and infrastructures. Some of these programs date back to the late 80s. The primary focus of current modernization and upgrades is to replace aircraft purchased from the Soviet Union that currently form the backbone of the Air Force. Being a global leader in the development and one of the top 5 military powers in the world, India is constantly developing new arms and ammunition and improving on previous versions of its weaponry. With security challenges increasing, both from within and across borders, the country seems poised to continue with its development agenda. In this post, we bring you some of the weapons that the country is developing right now.

BrahMos 2 or BrahMos mark – drama – is a hypersonic cruise missile currently under joint development by Russia and India’s defense research and development organization they have together form the BrahMos aerospace Private Limited and it is the second of the BrahMos series of cruise missiles the BrahMos 2 is expected to have a range of 450 kilometers our 280 miles and a speed of Mach 7 that is 8,500 kilometers or 5,300 miles per hour during the cruise stage of flight the missile will be propelled by a scramjet air-breathing jet engine other details including production cost and physical dimensions of the missiles are yet to be published it is expected to be ready for testing by 2020

Agni 6 will be a four-stage intercontinental ballistic missile which is in the hardware development phase after its design phase was completed it is expected to have multiple independently targetable re-entry vehicles as well as maneuverable reentry vehicles it will be taller than its predecessor of Nephite and the mouth of Agnes six will be between 55 to 70 tonnes the Government of India is yet to approve the project all the DRDO has completed all calculations and started the engineering work it is reported to be the latest and the most advanced version among the ugly missiles according to sources apne six missiles is likely to carry up ten mi RV warheads and will have a strike range of 12,000 kilometers through DRDO has refused to confirm the missile’s range

is the second INS ARIGHAT class submarine she is the second nuclear-powered ballistic missile submarine being built by india it is estimated to be commissioned this year and re God will have one seven blade propeller powered by a pressurized water reactor it can achieve a maximum speed of 12 to 15 knots went on surface and 24 knots when submerged the submarine has 4 launch tubes and it’s hump just like her predecessor and she can carry up to 12 K 15 Sagarika missiles or four of the under development K 4 missiles with a range of 3,500 kilometers are 2200 miles

defense program the Indian ballistic missile defense program is an initiative to develop and deploy a multi-layered ballistic missile defense system to protect India from ballistic missile attacks introduced in light of the ballistic missile threats from Pakistan and China it is a double-tiered system consisting of two land and sea-based interceptor missiles namely the pre P air defense missile for high altitude interception and the advanced air defense missile for lower altitude interception the two-tiered shield should be able to intercept any incoming missile launch from 5,000 kilometres away the system also includes an overlapping network of early warning and tracking radars as well as command and control posts the PA D and double-a D was tested in December 2006 in 2007 respectively and India became the fourth country to have successfully Philip tan anti-ballistic missile system after United States Russia and Israel the system has undergone several tests but system is yet to be officially commissioned